South Devons have earned themselves the reputation of “The Maternal Beef Breed.” They possess the fertility, ease of calving and milking ability that make “maternal magic.”

South Devon cows and South Devon Pound Maker cows are extremely fertile and quickly breed back. They range out in big country and adapt in a smaller operation while delivering a high fat index milk that deeps calves growing into the weaning period.

The proof of superiority of F-1 South Devon females is documented by one of the most comprehensive studies of South Devon in the U.S. at the U.S. Meat Animal Research Center (MARC), Clay Center, Nebraska. Economically important traits from conception to consumption were studied. Both Hereford and Angus dams were bred artificially to several sires of each of the breeds used in the study. (Cycle 1, Phase 2). The evidence was conclusive when comparing the beef breeds of South Devon, Limousin, Simmental and Charolais, only South Devons weaned a calf crop over 90 percent, actually 92 percent.

Historically, South Devons have been categorized as a dual purpose breed. They have very high milk solids for a beef breed with an average butterfat content of 4.2 percent. The MARC data ranks South Devon as one of the highest English breeds for milk production.

Breeding programs worldwide use a South Devon bull to produce a crossbred female that will generate higher milk yields that increase the growth potential of the calf and ultimately increase weaning weights.

The mothering ability and longevity of the South Devon cow is excellent. Lon Larson, manager of Circle 5 Ranches, Brewster, Nebraska stated “I needed to sell 200 cows out of 1200 because of the long drought in our area. We started to sort the old cows first. I discovered they were all South Devon and South Devon cross cows at 14-15 years of age.” He added: “They were the highest indexing cows in the herd the same year.”

A testament to the longevity of the South Devon cow comes from Lee Englehart, X-E Stock Ranch, Moses Lake, Washington, “Many of our South Devon cows are staying in production until they are 14-15 years of age and that alone adds significant profitability to an operation. When calving a large herd of cows with little help, good maternal traits are necessary. With South Devon you get exceptional maternal traits and the carcass traits come as an added bonus.”

Years of selective breeding have shown South Devon to be in line with other major beef breeds for birth and weaning weights. 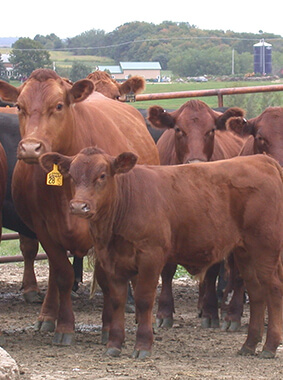 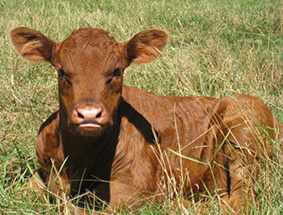